The Faith Community Working Group hosted an event on Tuesday March 8th which addressed how to “Stop Dangerous Speech”. Dangerous speech, which fuels intolerance, hatred and violence is threatening to tear the social fabric of our society. Parents, teens and educators that attended were taught how to build their own campaigns to stop dangerous speech online and in their communities; and ways to put an end to hate crimes, bullying, and discrimination. The event which was held at the Silver Spring Civic Center began with a networking and dinner reception The featured speakers were, Susan Benesch, Director of the Dangerous Speech Project www.dangerousspeech.org; Seth Gordon-Lipkin, Education Project Director, ADLwww.adl.org; and Steve Cohen, Director of Communications, CEP www.counterextremism.com. You may take heart in the midst of the hateful, racist, anti-Semitic, anti-Muslim and xenophobic rhetoric that we filled the hall of the Civic Building to address these issues. Nothing is more important today than coming together across racial, ethnic, ideological and religious lines to listen and care about one another. In this process we move from feeling alone into a sense of community, and from feeling anxious into being hopeful and grateful. View pictures and a video from the event. 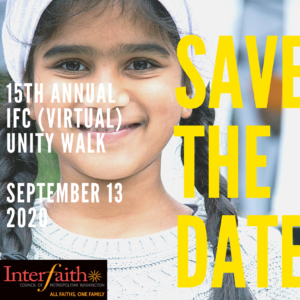 Against the backdrop of sadness and pain that we are witnessing in our country, many of us are experiencing a[...]
View Calendar
Add